With news Wednesday that Will Smith faces “disciplinary proceedings” over slapping Chris Rock on stage at the Academy Awards Sunday, many see a double standard in how Hollywood metes out punishments to VIPs who break laws or commit other harmful acts.

People on Twitter and elsewhere wonder: If Smith faces the possibility of having to return the best-actor Academy Award he won Sunday for his performance in “King Richard,” why hasn’t Harvey Weinstein, who has been convicted of rape and other crimes, had to return the Oscar he won for producing “Shakespeare in Love?”

They also ask: Why did the Academy even give a best-director award to Roman Polanski in 2003, when “The Pianist” auteur couldn’t be present at the ceremony because he fled the United States in 1978 after pleading guilty to unlawful sexual intercourse with an underaged girl?

Across social media and elsewhere, the names of many show business VIPs — mostly famous White men — have popped up as examples of this double-standard that, people argue, hurts women and people of color. British lawyer and women’s rights activist Shola Mos-Shogbamimu tweeted:

Now some of y’all demanding Will Smith, 5th Black man to win #Oscars, to be stripped?

Where was this energy before? https://t.co/wAGoNhNj9p

Mos-Shogbamimu also wrote in the Evening Standard that there’s a long list of famous White men who have committed “unspeakable” acts but now the Academy wants to make an example of a Black man. Others cite the other ways these men avoid getting  “canceled” by the industry or by society at large.

Instead, they are able to keep their awards, job opportunities and riches, despite accusations or findings that they abused their power and did bad things to other people, including acts of alleged racism, anti-Semitism or sexual or domestic violence.

With regard to Brody, who won his best actor Oscar for starring in Polanski’s “The Pianist,” people have been critical of the fact that he never faced disciplinary action for grabbing Halle Berry and forcing a kiss on her when he rushed up on stage to accept his award at the 2003 ceremony.

Meanwhile, Brando and Bertolucci‘s names also have been trending in the past week because the Oscar-winning director admitted in 2013 that he allowed the two-time Oscar winning screen legend to essentially rape his 19-year-old co-star while filming “Last Tango in Paris.”

One notable entertainment figure accusing the Academy of hypocrisy and a racist double standard in its handling of the Smith controversy is The Game. The rapper wrote a lengthy post, questioning why the Academy is even investigating “a lul ass slap in defense of a woman battling a very delicate health issue.”

Smith marched up on stage to slap Rock when the comedian was presenting the Oscar for best documentary and cracked a joke about Jada Pinkett Smith’s bald head. Rock reportedly didn’t know that Smith’s wife has alopecia, a condition that causes one’s hair to fall out.

While The Game argued that violence should “always be depicted in a negative light,” the rapper suggested that Smith’s slap wasn’t that big of a deal when compared to the transgressions of many other men. (It should be noted that The Game has his own history of altercations, weapons charges and allegations of sexual assault.)

The “Eazy” artist singled out Alec Baldwin as an example of why Hollywood doesn’t want Black men to “be equal, never have and never will.”

Baldwin, who was nominated for a best supporting actor Oscar in 2004 and served as  Oscars co-host in 2010, has been involved in multiple public fights over the years and is under investigation for the Oct. 21 fatal shooting of cinematographer Halyna Hutchins on the set of his Western film, “Rust.”

The Game said: “This fool Alec Baldwin took a woman’s life on set & got sympathy from the same Hollywood that is trying to condemn one of our greatest actors in history. It just so happens that he’s black !!!! Harvey Weinstein didn’t have to forfeit any accolades or awards & Roman Polanski was guilty of having sex with a minor & then vanished, became a fugitive & was still given an award.”

The debate about Smith’s possible punishment comes as the Academy of Motion Picture Arts and Sciences appears to be taking a hard line on his attack against Rock, which occurred during a live telecast, watched by millions of people around the globe.

The Academy announced Wednesday that its Board of Governors “initiated disciplinary proceedings against Mr. Smith for violations of the Academy’s Standards of Conduct, including inappropriate physical contact, abusive or threatening behavior, and compromising the integrity of the Academy.”

In a statement, the Academy also called Smith’s actions “a deeply shocking, traumatic event to witness in-person and on television.” The Academy also expressed regret that Smith controversially remained in the Dolby Theatre for about 40 minutes before he was named best actor for his performance in “King Richard,” for which he received a standing ovation.

Co-host Wanda Sykes said in an interview Wednesday that it was “gross” that Smith remained. The Academy insisted that Smith was asked to leave the ceremony after the incident and “refused.” But sources “close to the situation” are refuting that the actor was ever formally urged to leave the show, Variety reported Thursday..

“It appears that in the chaos that surrounded the altercation, the Academy and the show’s producer sent mixed message about whether Smith should be expelled from the event,” Variety said.

The Academy said that possible disciplinary action against Smith could include “suspension, expulsion, or other sanctions permitted by the Bylaws and Standards of Conduct.”

The Academy expelled Weinstein in 2017 as a member after more than 80 women, including well-known actresses, came forward to say that he sexually harassed or assaulted them over three decades. Weinstein was convicted in 2020 of sexual assault charges, including third-degree rape.

In the wake of the #MeToo era, the Academy also expelled Polanski and comedy legend Bill Cosby, who was convicted of aggravated indecent assault but freed from prison after his conviction was vacated. Only five people total have ever been expelled from the Academy, Vanity Fair reported.

As for the possibility that the Academy would rescind Smith’s Oscar, Hollywood Reporter writer Scott Feinberg tweeted “don’t bet on it.”

For one thing, Weinstein didn’t have his Oscar taken away. Feinberg said the Academy has only once ever once rescinded someone’s Oscar, and that was because of technicality. A film that won for best documentary in 1968 had actually been screened in 1967 and was therefore deemed ineligible.

“Rescinding over ‘bad behavior?’ It has never happened, not to people who were blacklisted during the McCarthy era, not to Roman Polanski and not to Harvey Weinstein,” Feinberg said. “I’m sure Academy members wanted to take back Oscars in those cases, but remember, an Oscar is a physical item which someone takes home. … Whatever happens later does not alter that reality. And the Academy does not raid houses.”

Fri Apr 1 , 2022
News briefs Aquatic (pool) therapy and physical therapy are two treatments that can reduce pain. But which is better for chronic low back pain? A small randomized trial published online Jan. 3, 2022, by JAMA Network Open suggests that buoyancy has the edge. Researchers took a group of […] 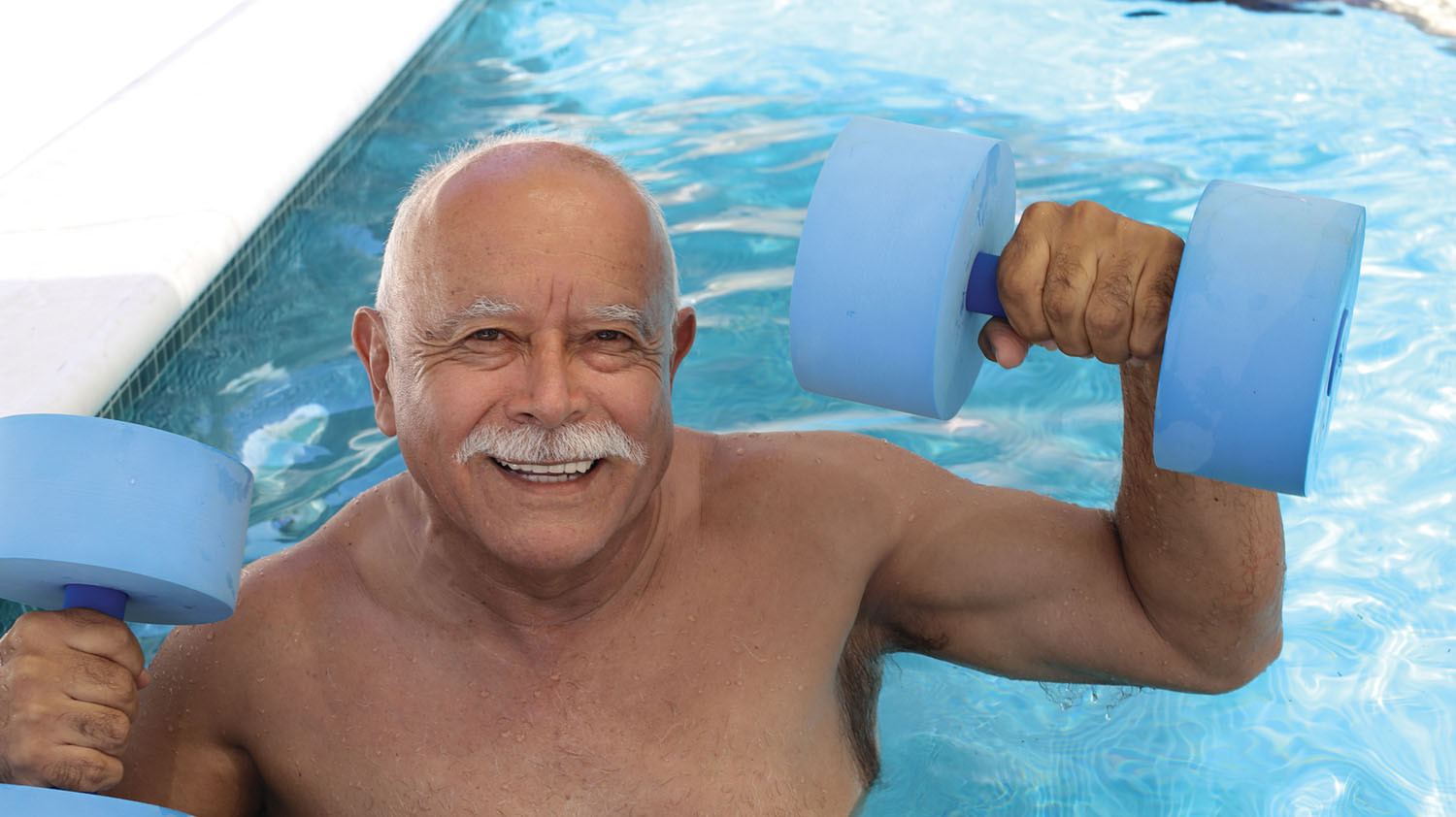