Outbreak at a glance

Six hundred and fifty probable cases of acute hepatitis of unknown aetiology in children have been reported to WHO from 33 countries in five WHO Regions between 5 April and 26 May 2022. The aetiology of this severe acute hepatitis remains unknown and under investigation; the cases are more clinically severe and a higher proportion develops acute liver failure compared with previous reports of acute hepatitis of unknown aetiology in children. It remains to be established whether and where the detected cases are above-expected baseline levels. WHO assesses the risk at the global level as moderate.

As of 26 May 2022, 650 probable cases fitting the WHO case definition1 have been reported to WHO from 33 countries in five WHO Regions, with 99 additional cases pending classification. The majority of reported cases (n=374; 58%) are from the WHO European Region (22 countries), with 222 (34%) cases from the United Kingdom of Great Britiain and Northern Ireland alone. Probable cases and cases pending classification have also been reported from the Region of the Americas (n=240, including 216 cases in the United States of America), Western Pacific Region (n=34), the South-East Asia Region (n=14) and Eastern Mediterranean Region (n=5) (Figure 1, Table 1).

Probable: A person presenting with an acute hepatitis (non hep A-E*) with serum transaminase >500 IU/L (AST or ALT), who is 16 years and younger, since 1 October 2021

Epi-linked: A person presenting with an acute hepatitis (non hep A-E*) of any age who is a close contact of a probable case, since 1 October 2021

*If hepatitis A-E serology results are awaited, but other criteria met, these can be reported and will be classified as “pending classification”. Cases with other explanations for their clinical presentation are discarded.

**Delta testing is not required, as it is only undertaken in persons who are HBsAg positive to establish presence of co-infection.

Figure 1. Distribution of probable cases of acute severe hepatitis of unknown aetiology in children by country, as of 26 May 2022 (n=650). 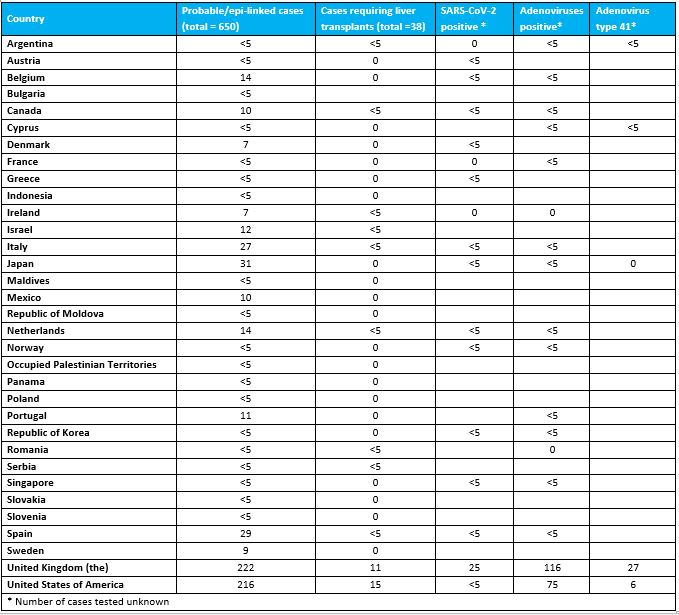 Out of the 650 probable cases, at least 38 (6%) children have required transplants, and nine (1%) deaths have been reported to WHO.

According to the latest Joint Surveillance Report by the WHO Regional Office for Europe (EURO) and the European Centre for Disease Prevention and Control (ECDC) on cases from EU/EEA countries which have been reported through the European Surveillance System (TESSy), as of 20 May 2022:

Based on the working case definition for probable cases, laboratory testing has excluded hepatitis A-E viruses in these children. SARS-CoV-2 and/or adenovirus have been detected in a number of the cases, although the data reported to WHO are incomplete. The United Kingdom has recently observed an increase in adenovirus activity, which is co-circulating with SARS-CoV-2, though the role of these viruses in the pathogenesis is not yet clear.

Further detailed epidemiological, clinical, laboratory, histopathological and toxicological investigations of the possible cause(s) of these cases are underway by several national authorities, research networks and across different working groups in WHO and with partners. Additional investigations are also planned to ascertain whether and where the detected cases are above-expected baseline levels.

WHO assesses the risk at the global level as moderate considering that:

Adenovirus has been found in 75% of the cases tested in the United Kingdom, but the data for other countries are incomplete. Of the small number of samples that have so far been typed, a majority have been confirmed for Type 41 adenovirus (in the United Kingdom, in 27 of 35 cases with an available result). Adenovirus associated virus 2 (AAV-2) has also been detected in a small number of cases in the United Kingdom using meta-genomics in liver and blood samples. However, many of the remaining cases did not have appropriate samples taken, highlighting the importance of appropriate sampling (whole blood) to further characterize the type of adenovirus detected. Additionally, Type 41 adenovirus infection has not previously been linked to such a clinical presentation in otherwise healthy children.

While adenovirus is a plausible hypothesis as part of the pathogenesis mechanism, further investigations are ongoing for the causative agent; adenovirus infection (which generally causes mild self-limiting gastrointestinal or respiratory infections in young children) does not fully explain the more severe clinical picture observed with these cases. Factors such as increased susceptibility amongst young children following a lower level of circulation of adenovirus during the COVID-19 pandemic, the potential emergence of a novel adenovirus, SARS-CoV-2 co-infection or a complication of previous SARS-CoV-2 infection, leading to superantigen-mediated immune cell activation, proposed a causal mechanism of multisystem inflammatory syndrome in children need to be further investigated. Hypotheses related to side effects from COVID-19 vaccines are currently not supported as most of the affected children did not receive these vaccines. Other infectious and non-infectious explanations as independent or contributory factors need to be excluded to fully assess and manage the risk. It is important to note that the current apparent association identified with adenovirus could be an incidental finding due to enhanced laboratory testing in association with increased levels of community transmission of adenovirus. This will be further clarified with the expansion of adenovirus testing to other cases beyond Europe and the United States, and reporting of the findings from the UKHSA case-control study currently underway.

The absence of a confirmed aetiology poses additional challenges in some countries, including implementation of WHO’s case definition and further diagnostic exclusion, due to limited testing capacity, including for Hepatitis A-E viruses and adenovirus. The presence of cases of acute hepatitis in children cannot be ruled out in countries where cases have not been detected or reported yet, but it is unlikely that symptomatic and severely ill case patients requiring hospitalization would remain undetected.

Member States are strongly encouraged to identify, investigate and report potential cases fitting the case definition above. Core epidemiological and risk factor information can be collected and submitted by Member States to WHO and partner agencies through agreed reporting mechanisms (e.g. IHR, the TESSy platform in the European Region, and others). WHO is developing a clinical case reporting form to support data collection through the existing WHO Global Clinical Data Platform.

Whole blood, serum, urine, stool, respiratory and liver biopsy (if available) samples should be undertaken for all cases meeting the case definition. Especially if testing capacity is limited to conduct a full investigation of the cause, facilities should collect and store samples for future testing, typing, and/or referral testing, as capacity limitations necessitate. WHO is developing interim guidance and establishing a network of regional and global referral labs to support Member States with laboratory testing.

Any epidemiological links between/among the cases might provide clues for tracking the source of illness. Temporal and geographical information of cases, as well as their contacts should be reviewed for potential risk factors. There is an urgent need to gather additional information to assess the potential role of infections, including current adenovirus and on current and past SARS-CoV-2 infection, as well as investigate other potential explanatory/contributing factors (either other infections, toxins, medications, or other underlying diseases (s)).

For the prevention of adenovirus and other common infections, perform regular hand washing and respiratory hygiene.

Until more is known, general infection prevention and control practices include:

Health facilities should adhere to standard precautions and implement contact and droplet precautions for suspected or probable cases.

In children with acute hepatitis, the main concern is to identify cases early to ensure optimal case management and to determine the cause, since management and control measures and capacities will depend on the specific causative agent.  While most countries have the capacity for medical treatment of acute hepatitis, this is not true for liver transplantation capacity or for intensive support and care for liver failure.

WHO is closely monitoring the situation and supporting international coordination working with Member States and partners.

Mon May 30 , 2022
A Duke professor disputed with department members about mandatory training with the Office for Institutional Equity, calling the modules “left-wing Maoist political propaganda workshops,” according to an email chain among Duke School of Medicine Molecular Genetics and Microbiology department members obtained by The Chronicle.  On Tuesday, MGM Chief Administrative Officer […]