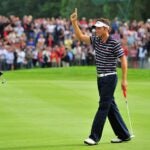 Nick Dougherty points to the sky in the aftermath of his 2009 BMW International win.

Mental-health discussions have taken center stage in recent months, especially in the professional-sports arena. High-profile athletes are seeking to end the stigma surrounding depression and anxiety by speaking freely about the difficulties they have had coping with the pressures they face. It’s a conversation that is long overdue.

In the world of men’s professional golf, players like Bubba Watson and Matthew Wolff have been leading the charge, opening up about their ongoing battles. On this week’s episode of Off Course with Claude Harmon, three-time European Tour winner turned Sky Sports analyst Nick Dougherty explained why he can empathize. He, too, struggled with mental-health issues in the wake of his mother’s death, and said he would have appreciated having someone to relate to at the time.

“It definitely would [have been helpful], because when Mum died, unfortunately I was right at the top of the Ryder Cup standings,” Dougherty said. “And it was a Ryder Cup year, it was [Nick] Faldo’s team. I decided after Mum died — because it was an escape from something that was so painful — rather than having to face that, I turned to, I’m gonna make the Ryder Cup team for my mum. And it became my be-all and end-all, and I threw myself into golf, and of course it was painful, because I had all this stuff going on inside me. And ironically, I’d play in tournaments, I’d be in tears walking down the fairway and finishing top 10. Because I was a good golfer, but I was in ribbons inside.

“And of course I didn’t make the Ryder Cup team. I just missed out,” he continued. “And then the next year, I won. [That’s] where I lost all of it. I didn’t say out loud, ‘I’m really struggling.’ I almost needed to know, ‘It’s all all right, mate. It’s gonna be a tough time. Life’s not ever gonna be the same again, it’s all okay.’ I just thought, I’ll play my way out of this. And of course, the one thing I could touch was my golf swing.”

Dougherty said he started making changes to his swing and his team, going away from the foundation that had made him a top-50 player. Though he notched the last of his three victories at the BMW International Open in 2009, Dougherty said his playing career was effectively over.

“I felt so hollow,” Dougherty said of going out to celebrate in the wake of his victory. “It actually occured to me: ‘My mum wouldn’t have given a crap about any of this.’ She wouldn’t have cared. She would have been like, ‘Are you happy?’ ‘No Mum, I’m not happy.’ That’s when I realized, wow, I’ve won three times in 360-odd starts, and this is what it feels like? I realized I was in trouble.”

For more from Dougherty, including what it’s like to run out of golf balls in a professional tournament, and the hardest part about the transition from player to analyst, check out the full interview below.

As a four-year member of Columbia’s inaugural class of female varsity golfers, Jessica can out-birdie everyone on the masthead. She can out-hustle them in the office, too, where she’s primarily responsible for producing both print and online features, and overseeing major special projects, such as GOLF’s inaugural Style Is­sue, which debuted in February 2018. Her origi­nal interview series, “A Round With,” debuted in November of 2015, and appeared in both in the magazine and in video form on GOLF.com.

Sat Feb 26 , 2022
Washington, DC, Feb. 24, 2022 (GLOBE NEWSWIRE) —  Children’s Health Defense (CHD) announced yesterday it will be covering The People’s Convoy as truckers and other protesters travel across the U.S. towards the Washington, DC area in a peaceful protest of unconstitutional mandates and government overreach. Claire Dooley and Ariana Victor […]